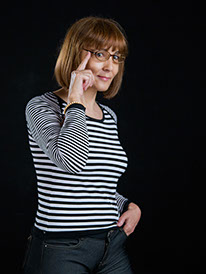 She is a multidisciplinary artist belonging to the "reflective generation" that came to prominence in Spain towards the end of the 80s and beginning of the 90s. Awarded with the Award for the Best National Degree (1987) and the FPI Dissertation Research Fellowship (1988-1992), she has received numerous awards and grants. Doctor from the University of Barcelona (1993) and InSEA member (UNESCO), she is lecturer and doctoral advisor at the Faculty of Fine Arts, Altea Campus, University Miguel Hernandez - UMH, Elche, Spain, since 1998, where she has taught Drawing and Photography and has directed doctoral theses. Also she has been Director of the Drawing Area (7 years) and of the International Relation Office (2 years). She is Agent of Peace, Nipissing University Peace Research Initiative -NUPRI, Ontario, Canada, also WOMAN of ACTION, Toronto, Canada, and Representative in Spain of Voices of Women Worldwide & VOWW-TV headquartered in NY and some 160+ countries.

From 1985 till now she has put on over a hundred national and international exhibitions in galleries and museums, taking part in Biennales and Fairs. Her work is represented in important Museums as MACBA and Private and Public Collections all over the world, and is currently on sale at the following ART GALLERIES: Maeght, Paris. Jorge Alcolea, Madrid. Klaus Kramer LTD, Altea. Contempera, Amsterdam. Art Eterne, New Delhi. Cortabitarte, Soria. Southfields, London.